Last 20th of November 2019, during his visit to the south of Spain, the Superior General of the Society of Jesus, Arturo Sosa Abascal SJ, gave the keynote speech at the formal inauguration of Universidad Loyola’s new campus in Seville, Spain. Both the President of the Regional Government of Andalosia and the Major of Dos Hermanas, where the new campus is located, also addressed all attendees in order to officially welcome the university. Universidad Loyola received a large Jesuit representation as well with delegates of Jesuit universities from the six regions, including the Rectors and Directors of the different higher education institutions of the Province of Spain, the UNIJES network, and the President of the Association of Jesuit Colleges and Universities Africa and Madagascar (AJCU-AM).

During his visit Fr General was accompanied by his Assistant for Southern Europe, Fr Cipriano Díaz SJ and the Provincial of Spain, Fr Antonio España SJ. 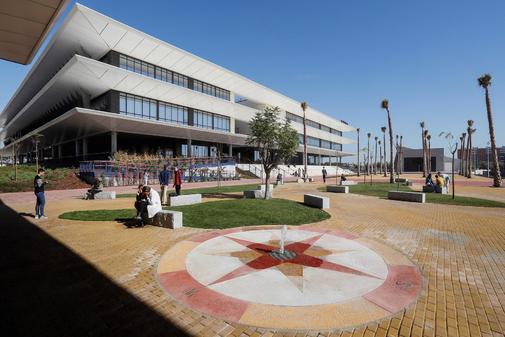 Located on the outskirts of Seville, in the town of Dos Hermanas. In its first phase, the new campus facilities occupy a surface of 36.000 m2. The university has up to 120.000 m2 of extension to continue growing in the future, to reach an estimated capacity of 10.000 students. It has been designed to be sustainable (and apply for the LEED Gold green building certification) and offers a state-of-the-art 5G technological infrastructure. Designed by Luis Vidal (globally recognised architect who among others designed the T2 Heathrow Airport in London) the new campus fosters a lively university community where faculty, staff and students can interact, connect and collaborate. The main structure is formed by three connected buildings, but the premises also contain a library, a chapel and different sports facilities.

In his speech to Universidad Loyola community, Fr General mentioned the “four options that the Society has chosen” (Universal Apostolic Preferences) to materialise the service to the mission of reconciliation of the Church in the “midst of this increasingly complex and uncertain world”.

He also framed that “in this complex world, each one of us, our works and our institutions are becoming an ever-smaller part of the world… As the world globalizes and our individual possibilities grow, we become smaller in relative terms, we become more insignificant”. In this context he stressed the importance of working within networks and collaboration as the way of proceeding of the Society of Jesus, and portrayed the International Association of Jesuit Universities (IAJU) as a network that will take to a new dimension and universality “the commitment assumed by the universities of the Society of Jesus to be agents of social transformation”.

Fr General recognised Universidad Loyola creation as a result of “the firm self-confidence that Father Kolvenbach recognized ETEA (it's predecessor business school founded in 1963) in his 1992 visit”. He highlighted the importance of “the collaboration of people linked to the Society of Jesus and committed to its works” and of the “support of the universities and sister centres of Deusto, Comillas, ESADE, IQS, INEA, etc.” He also underlined that Loyola has “developed its international DNA thanks to Loyola Chicago and, through it, with the Society's network of Universities around the world”

Finally, he acknowledged the university commitment “for more than 30 years to international cooperation” through Fundación ETEA in collaboration with the three Central American Universities (UCA’s), and the opportunity when, God willing, integrating “the knowledge cultivated by the Facultad de Teología de Granada”.

Fr Sosa concluded encouraging Universidad Loyola to “work within networks, work with others. Work together”

Throughout the campus visit Fr General had also an encounter with the Alpha Sigma Nu (ASN) student chapter at Universidad Loyola and with the ASN Global Board representative, Francisco Sanchez Cuellar. During his tour of Andalusia he also visited the Faculty of Theology of Granada where he invited the professors to always put the students in the center following the Ignatian spirituality cura personalis, he also underlined the dialogue with Islam as a priority task for theology in Europe. The Faculty of Theology is now in a process of integration to Universidad Loyola.

Fr General continued visiting the Sagrada Familia’s School of Education in Úbeda and other apostolic works in the region.

Fr General in Faculty of Theology of Granada